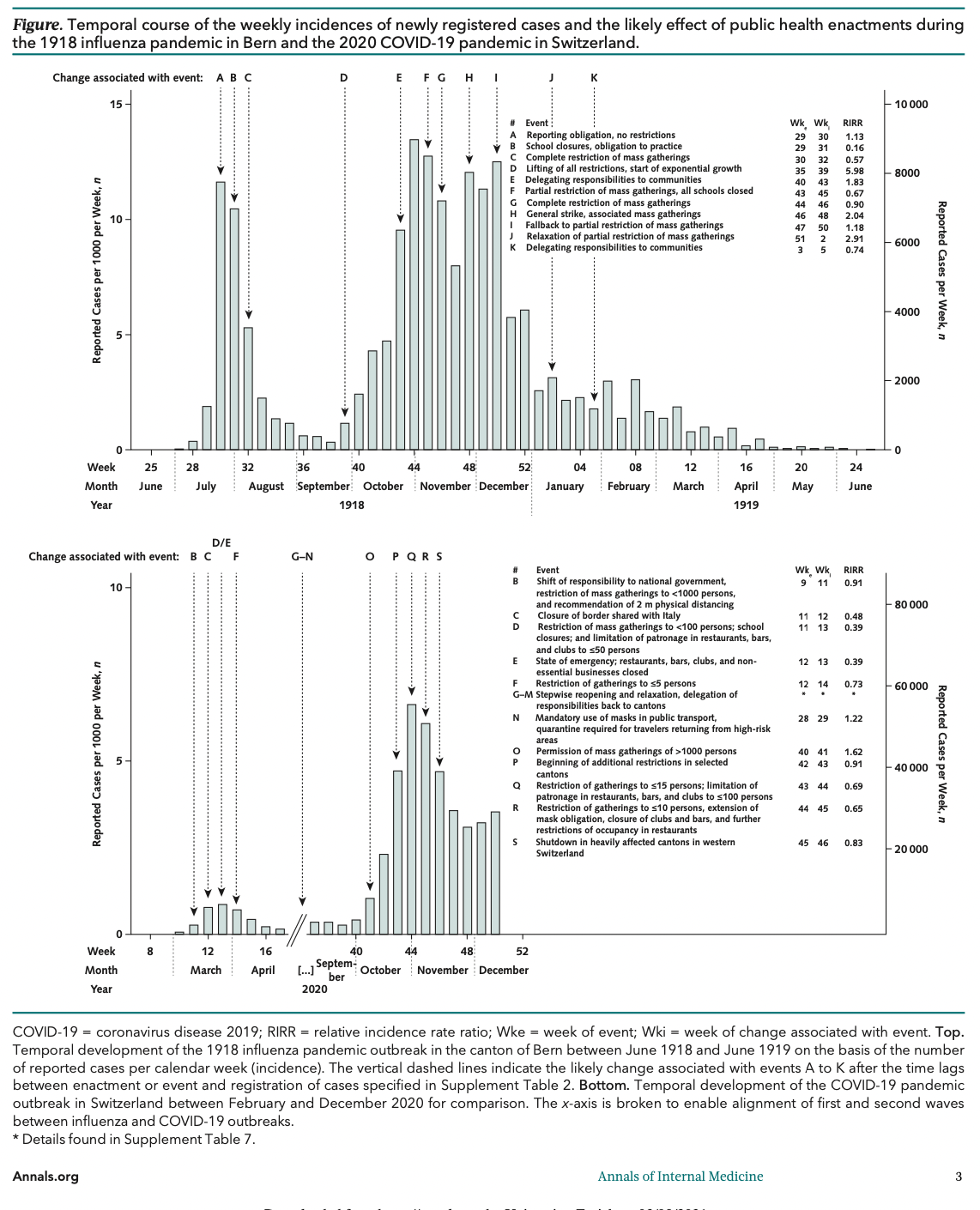 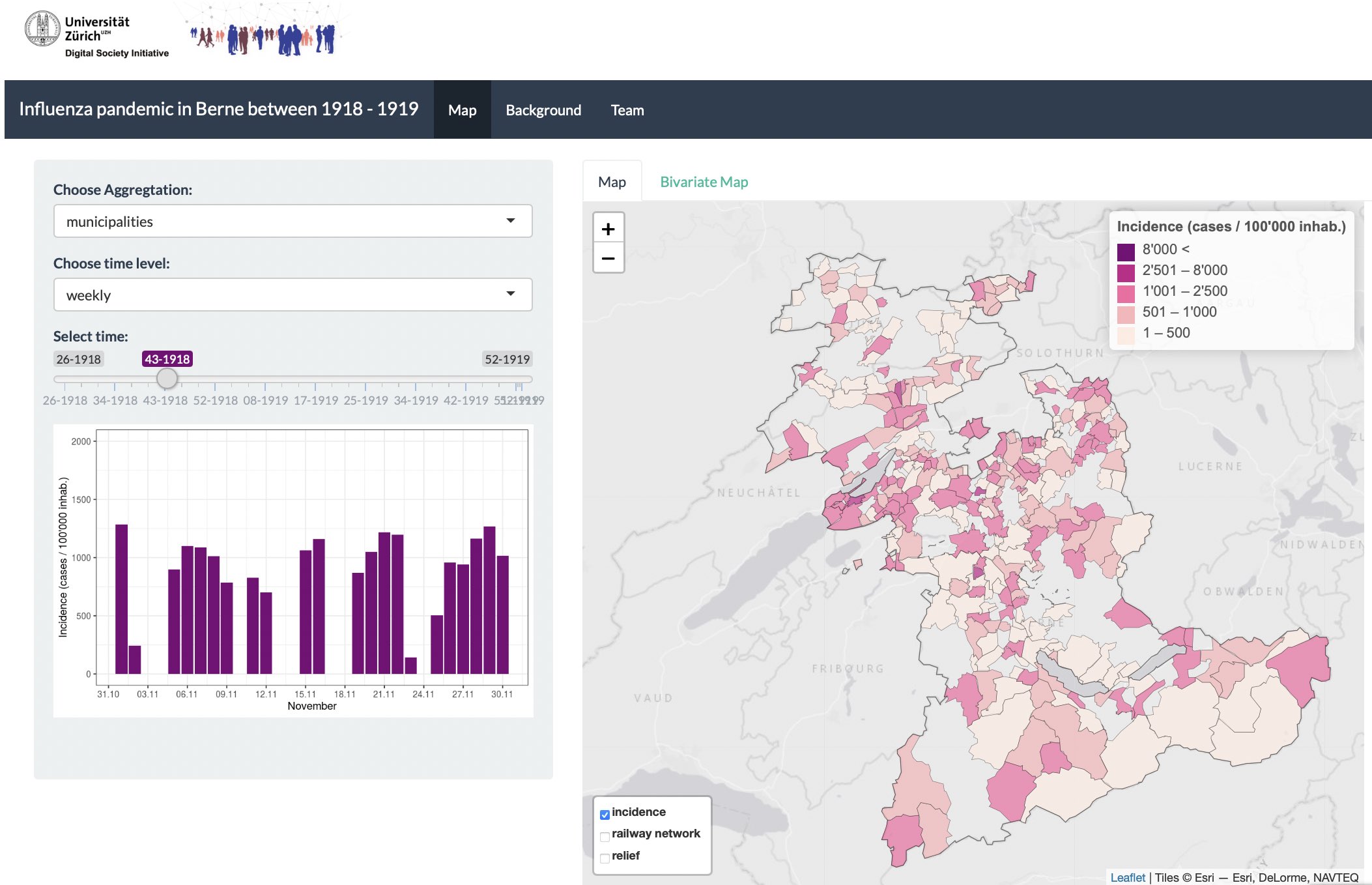 Geo-Visualization of the 1918 pandemic in Bern

R Shiny geo-visualization of the spread of the "Spanish flu" 1918 among municipalities in the Canton of Bern (work in progress).

Since 2013, Historical Epidemiology has become an integral part of the research portfolio of the Anthropometrics and Historical Epidemiology Group. In this line of research, historical data is analysed with modern epidemiological methods and put in context to learn from the past for the present and the future. Here, we summarise our research activities on past viral pandemics in Switzerland.

B) Relevance and aim

The current COVID-19 outbreak illustrates that the emergence of viral pandemics continues to be an immense challenge for public health and societies as a whole. Health policy makers would benefit from historical experience to increase risk awareness and inform decision making. However, valuable experiences from the past are not sufficiently accessible for researchers, policy makers, teachers, and the interested public. We aim to change that by digitising and thus making accessible archival data, and by extract the lessons to be learned from these data.

At the moment, we focus on the following research projects:

We have initiated and lead an interdisciplinary collaboration between historians, epidemiologists, and geographers who analyse weekly incidence data of influenza-like illness reported by Bernese physicians between June 1918 and June 1919. In a publication in Annals of Internal Medicine we show that aggregating data at the level of larger geopolitical areas may conceal regional variations and result in ecological fallacies. Furthermore, we also show that public health interventions like those used during the COVID-19 pandemic were associated with containment of epidemic growth, mass gatherings during the second wave were associated with a resurgence.

2. Modelling the spatial-temporal spread of the 1918/1919 Bern outbreak on municipality level

Together with Dr. Oliver Grübner and Prof. Sara Fabrikant we are co-supervising a running MSc thesis project by Corina Leuch at the Department of Geography of the University of Zurich. In this project, the analysis of the Bern data is expanded by information on weather, socio-demography, access to the railway system, or comorbidity with tuberculosis on the level of municipalities. A blog entry has been written by the student about her ongoing work, and the project is to be completed in January 2021.

3. A first interactive geovisualisation of the Bern 1918/1919 outbreak

Together with Dr. Oliver Grübner we were granted a small Kick start money grant from the Digital Society Initiative at the University of Zurich (DSI, Challenge Area Health). In fall 2020, a first exemplary interactive online data visualisation of the Bern pilot data will be realised.

4. Recollection of past pandemics during ongoing outbreaks

Humans tend to place present events in the context of past experiences. In times of crisis, reflection on the learning processes from the past is initiated. In a recently published Letter to the Editor we show that during the current COVID-19 outbreak, there is an unprecedented increase in the public and scientific interest toward the Spanish flu. In a recent Op-Ed in Swiss Medical Weekly we show, that in Switzerland, experiences of past epidemics might be insufficiently present in the public at large. Consequently, we are calling for more science communication to a wider public as well as to policy-makers.